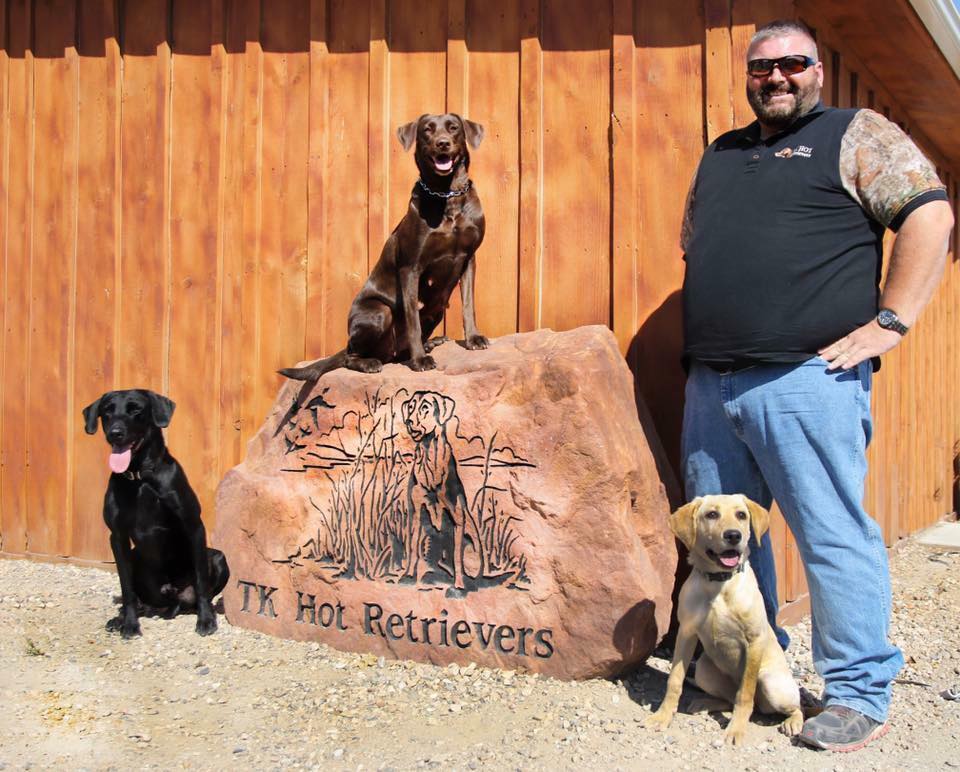 The Story of TK Hot Retrievers. What’s in a name? We are often asks what does TK Hot Mean? or How did you come up with that name? Well TK Hot is an acronym that stands for “The Kennel Holds Our Treasures. Thus, TK Hot.” Our story begins in the 1970’s My father and grand father were “True” dog men and instilled in me a intense desire to work with dogs. I don’t know if either one of them knew about the psychological power of raising kids with dogs. Or how much dogs can teach kids about love, responsibility and respect for creatures. But looking back at my life with them I was truly blessed.

My father was a combat veteran of the Vietnam conflict and was so impressed with the German Shepherds that he was able to work around during his time in the Army that we always had a German Shepherd in the house. But for my 2nd birthday he got me my first Black Lab. Sammy, in my young mind she was the best dog ever. Always by my side. Hanging out in the yard with me, snuggling on the couch and eventually walking me to school and waiting by the door for me to return. True to the Labrador temperament she was social, outgoing, confident with the inherited that strong desire to retrieve.

But it wasn’t until I was in High School in the mid 1980’s when I was introduced to a true “Field Bred” Labrador. Up until that time I thought all Labradors were the same. I was driving down I-5 from Ashland Oregon to my home in Central Point Oregon, while traveling at 55 mph a flash of black caught my eye. I look to my right and saw a couple of gentlemen in a field making funny arm motions and suddenly out of a pond popped this black dog. I slowed down and pulled over and watched for while. I had to figure out how to get back to that frontage road talk to those guys. Little did I know how this chance meeting would change my life with dogs forever. That day I would be introduced to Jay and Val Walker of Trieven Kennels and a fine gentleman named Dr. Paul Foster of Rockcliff Labradors. I would go on to own a tremendous son of AFC Trieven Twist and Shout named Treiven Black Taurus and then a super female from Paul’s breeding of FC AFC Ornbaun’s Buckwheat to his female Rockcliff’s Three Wire Trap. That little female Pistol aka “Super Powder Pistol” would be my introduction to the world of AKC Hunt Tests. More then 30 years and dozens of dogs later I still remember that moment like it was yesterday.

Want to learn more about what our professional gun dog training services can do for you? Click learn more and we will get back to you ASAP.

We service the following areas:

Don't see your area? No problem. We train dogs from all over the US. Contact us for additional info.